Skip to content
Have you ever had a torn rotator cuff or broken arm and stayed home from the gym.  Well don`t!Research has shown that by performing  single-side training with the non-injured limb it will minimize the effects of atrophy and accelerate healing in the injured arm. This effect is known as cross-education.You increase strength in the injured limb due to neural adaptations. You will still have to train bilaterally to trigger a hypertrophy response but you will not lose muscle as fast in the injured limb.
There is a study in the Journal of Exercise Science and Fitness that during the cross-education effect, there is a gain of strength in the range of 5 to 25 percent to the injured limb when training the opposite limb. Another major benefit is there will be less range of motion loss in the injured limb do to the cross-education effect.
Another study in the Scandinavian Journal of Medicine and Science in Sports states that cross-education works on the extensors and flexors of the injured limb.
This study used electrostimulation of the right wrist flexors using an eccentric contraction and demonstrated impressive strength gains in the untrained wrist muscles. Participants received the electrostimulation five days a week for six weeks. The untrained left wrist extensor and flexor muscles increased strength significantly, both >improving by about 45 percent. Researchers suggest that strength gains in the immobilized limb were substantial because eccentric contractions were induced by using electrostimulation that triggered a maximal voluntary contraction in the right wrist, thereby providing greater neuromuscular stimulus to than a concentric contraction.
Although Cross-education is not completely understood,  strength gains in the injured limb are likely from neuromuscular adaptations and increased neural drive to the untrained muscle. By training the healthy limb, the body recruits more high-threshold motor units in both limbs. There is no evidence of hypertrophy or changes in muscle fiber types in the immobilized muscle following single-side training.
Cross-education highlights the importance of single-side training. i stress that my patients  continue with  single limb training during an injury. So next time your have an injury, do not let that stop you from working out.
References:
Sariyildiz, M., Karacan, I., et al. Cross-Education of Muscle Strength: Cross-Training Effects are not Confined to Untrained Contralateral Homologous Muscle. Scandinavian Journal of Medicine and Science in Sport. April 2011. Published Ahead of Print.
Lee, M., Carroll, T. Cross-Education: Possible Mechanisms for the Contralateral Effects of Unilateral Resistance Training. Sports Medicine. 2007. 37(1), 1-14. 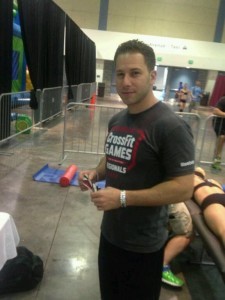 Dr. Brett A. Goldstein is a Palmer Graduate Chiropractic Physician who dedicates himself to treating his patients’ symptoms and physical dysfunctions and returning that patient to a pain free status. Dr. Goldstein received his B.S. degree from Florida Atlantic University in Exercise Science and worked in the gym part time to help teach correct techniques for lifting. This is where he discovered his passion for working with people who care about their health. He has helped a wide variety of people from working on professional athletes at the regional cross-fit games to the weekend warrior and office worker. Dr. Goldstein was recently named the official Joimo Sports league Chiropractor. Since graduating from chiropractic school, Dr. Goldstein has learned the techniques in Active Release Technique (A.R.T), Graston Technique, and Kinesio® Taping, which are the leading soft-tissue diagnostic and treatment protocols that deal with over-use strain that plagues today’s society. In his spare time he enjoys being with his family, playing soccer, kayaking and extreme bike riding.